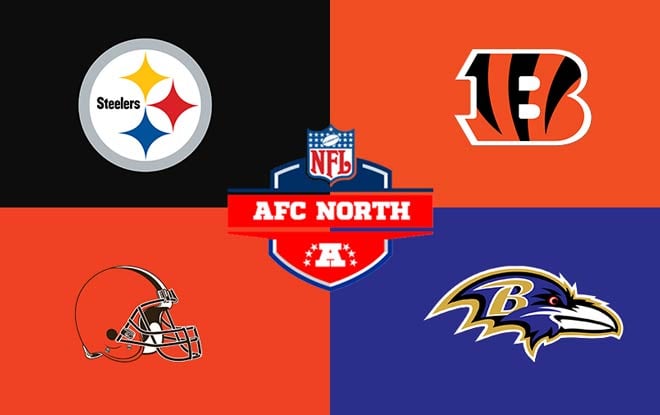 Top offshore sportsbooks are aware that the AFC North division is the Pittsburgh Steelers’ yard. They just allow the Ravens, Bengals, and Browns to play there. The Steelers have won 22 AFC North divisional titles, including the last two straight, and three of the last four. The Bengals have won two of the last five. However, the Ravens are the only credible threat to Pittsburgh’s dominance. Baltimore will be looking for their first division championship since 2010 (when they won the Super Bowl, wink wink). As for the Browns, they would probably be happy not finishing last. They need upward mobility. Speaking of which, have you tried mobile betting?

The AFC North division is to the Steelers what the NFL is to the Patriots. Head coach Mike Tomlin+QB Ben Roethlisberger+wide receiver Antonio Brown+running back Le’Veon Bell=divisional title. Of course, math is not an exact science. Well, actually it is. But you get the idea. The Steelers’ offensive trident may lose one of its prongs soon. And another may not have long left before it starts to get rusty. And the other is Antonio Brown. But as long as three are healthy, under contract, young-ish, and in Pittsburgh, the best online sportsbooks will favor the Steelers to win their division.

The only offensive change of note is that Randy Fichtner has been promoted to offensive coordinator. No sweat, though. When in doubt, Fichtner needs only ask himself, what would Steven Sarkisian do? And the do the exact opposite. He could even have a bracelet made with the acronym WWSSD.

If the Steelers have the offense, then the Ravens need to have the defense. Two seasons ago, Bell ran for 122 yards and Roethlisberger hit Brown for a last-minute score that clinched the division for Pittsburgh. And December last, Big Ben passed for 506 yards and two touchdowns, while Bell scored twice. The Steelers defeated the Ravens 39-38. Baltimore clearly needed a change. So out went former defensive coordinator Dean Pees and in came Dan Martindale. As Mike Preston of the Baltimore Sun writes, “Pees never missed a tackle, or failed to get off a block. It’s just that Martindale is more aggressive in his approach.” In addition to the ‘Berger, the Ravens will face Drew Brees, Cam Newton, Derek Carr, Matt Ryan, and Philip Rivers this season. That doesn’t bode well for their odds at top offshore sportsbooks.

Owner Mike Brown gave head coach Marvin ‘The Martian’ Lewis a two-year extension following the 2017 season. After three lustrums, Brown must have grown accustomed to his face. Elsewhere in the coaching staff there have been some changes. Including a much needed new offensive line coach. Additionally, the Bengals acquired tackle Cordy Glenn, right tackle Bobby Hart and center Billy Price. All in a bid to avoid finishing last in yards gained again. Starting QB Andy Dalton must be very thankful for that. On defense, Cinci extended the contracts of defensive end Carlos Dunlap and tackle Geno Atkins. They were two of the few highlights of a secondary that ranked 18th in yards allowed last year.

According to ESPN, “Tyrod Taylor [is] turning out to be QB Browns were hoping for.” First of all, don’t finish a sentence with a preposition. And second, Taylor better be the QB for whom the Browns were hoping (see, it’s not that hard). Because head coach, and I use the term loosely, Hue Jackson is deadest in having Baker Mayfield be Taylor’s backup. Why? Because he is freakin’ Hue Jackson. I get it. Mayfield is a rookie and Taylor is a veteran. But the Browns aren’t going to be lot better off for starting Taylor. Why not start Mayfield and allow him to gain valuable experience for the future? Plus we all know Jackson is going to end up starting him sooner or later anyway. Like he did DeShone Kizer last season. Oh, well.

Odds from Intertops.eu, one of the top offshore sportsbooks.