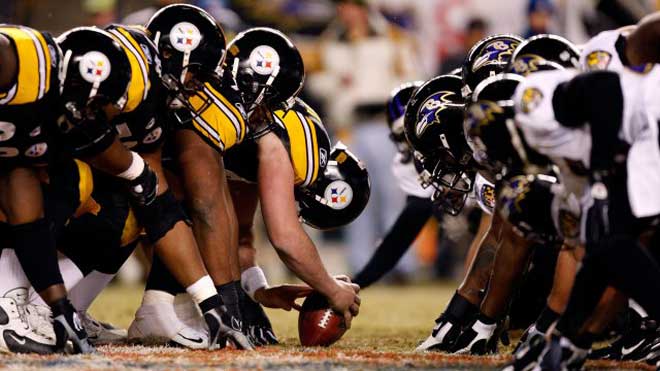 We’re sure not what the major headline is here. Is it that the Pittsburgh Steelers, who are 10-0, are looking to keep that undefeated record alive?

Or is it that the Baltimore Ravens have been hit hard suddenly by the coronavirus? A rash that has taken quarterback Lamar Jackson with it?

It’s a matter of whatever you prefer to look at. The issues at hand have forced the game to be pushed back from Thanksgiving night until Tuesday at 7:10 PM ET on NBC.

Customers at BetOnline are very interested in this game, because it is still in force as the focus of the Thanksgiving Score Predictor, in which those who can pick the score correctly can win at least a share of $10,000.

And let’s check out the NFL betting odds on this AFC North matchup:

Remember that you can get greatly enhanced payouts on pre-selected parlays every day of the week with Odds Booster!

Where they stand at the moment

The Steelers have the AFC North race in a headlock. They are 10-0 (and a sizzling 8-2 against the point spread), with the Ravens at 6-4 (4-5-1 ATS). Needless to say, the four-game lead of Pittsburgh’s is nearly impossible to overcome.

Baltimore is going to be in a dogfight for a playoff spot. In fact, they have a lot of competition in the wild card skirmish. They are, at the moment, behind Tennessee and Cleveland. And they are dead even with Miami and Las Vegas.

The Steelers have to keep winning to be in position for the #1 playoff seed in the AFC. They are only a game ahead of the Kansas City Chiefs in that pursuit.

A different Ravens team without Jackson?

As it stands now, the Ravens are going to be without quarterback Lamar Jackson. The reigning league MVP has tested positive for COVID-19 and has had to go into isolation. Because of his ability to run with the ball, which is somewhat unique, this changes what Baltimore can do.

Jackson was at the top of his game last season. And he had defensive coordinators somewhat befuddled. Some observers felt as if teams could catch up with Jackson and figure out a way to neutralize him.

You might say that has happened. Baltimore looked like such an offensive juggernaut in 2019. But this season they are 26th in the league in yards per drive. They have been a little better in the “points per drive” category (19th), but by all accounts, they have severely underachieved.

In steps another Heisman winner

The absence of Jackson likely leaves the Ravens in a position where they’ll have to turn to Robert Griffin III. Griffin, like Jackson, is a Heisman Trophy winner who built a reputation by using his legs to make plays. And like Jackson, there has been skepticism about Griffin’s ability to launch the ball.

But the difference is that Griffin has suffered some attrition over the years. Some of this comes by way of his injuries. So if you are looking for his prime, you missed it. He doesn’t run like he did when he was a rookie. And he has never been an accurate thrower.

Griffin won’t likely be able to navigate around the Steelers’ defense all that well. They bring a lot of pressure, leading the league in sack percentage. And they are also #1 in a number of other statistical categories. That includes both yards and points allowed per drive, turnovers forced per drive. They’ve also forced a three-and-out 26.3% of the time, which is best in the league.

As it is, the Ravens’ offense hasn’t been performing. And these latest developments don’t represent an advancement. Rather, this is trouble against a highly-motivated Pittsburgh team. So laying the points isn’t the worst idea ever, although this line keeps rising.

BetOnline is the place where you can get the biggest selection of props to wager on for each and every NFL game……… And they will unquestionably brighten up this Tuesday write-in game……… And you can take advantage of Odds Booster, which gives you extraordinary payouts on pre-selected parlays, every day of the week……… They make it very convenient to open up an account, as you can use many cryptocurrencies, including Bitcoin!