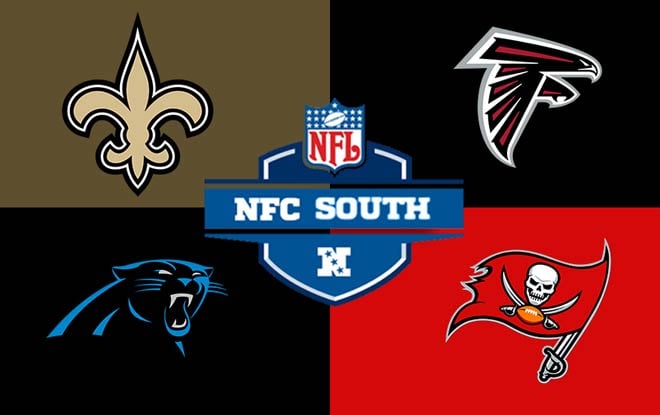 The best sportsbooks for US players back the New Orleans Saints to win the NFC South division. That’s not small potatoes. According to the Denver Post, the NFC South is the toughest division in the NFL. Though I haven’t the foggiest as to how they arrived at that conclusion. Hey, you get a subscription to the Denver Post! They may be on to something, however. This division is the only one since the 2002 realignment to have each of its teams reach a conference championship game and also make a Super Bowl appearance. Not too shabby considering it was only created in 2002.

The youth movement is going strong in the Big Easy. Running back Alvin Kamara and cornerback Marshon Lattimore were named the 2017 offensive and defensive rookies of the year. Wide receiver ‘Phillip’ Michael Thomas. Right guard Ryan Ramczyk. Safeties Vonn Bell and Marcus Williams. Defensive tackles Sheldon Rankins and David Onyemata. Cornerback Ken Crawley. Linebacker Alex Anzalone. They have all been in the league for two years or less. Verily, the Saints’ future is so bright they gotta wear shades. And so is, according to the best sportsbooks for US players, their present.

However, the glue that holds it all together is 39-year-old QB Drew Brees. Breesus had his 12th straight 4000+ passing yards season. Also, he threw his second-fewest interceptions (8). He should have another great season since the Saints’ offensive line is returning all its starters. The O-line was instrumental in New Orleans’ passing and rushing. Though running back Mark Ingram will miss the first four regular season games.

And speaking of returning starters, the Falcons. They are returning 19 of 22 starters. The only offensive starter not returning is running back Derrick Coleman, who signed with the Cardinals. Defensive tackle Dontari Poe and defensive end Adrian Clayborn are the only two defensive starters not returning. And neither Coleman, Poe, nor Clayborn will be missed. At least according to Mark Bradley of the Atlanta Journal-Constitution. Who claims Atlanta will go 11-5. For instance, the Falcons will beat the Eagles. Because “Carson Wentz hasn’t played since December, and Super MVP Nick Foles was nicked in preseason.” Though elsewhere Bradley says that preseason games mean nothing. Contradiction much, Mikey? The fact remains it’s time for OC Steve Sarkisian to make the offense work like he used to make his liver work. Otherwise Atlanta will fail again to win the division.

Missing QB Jameis Winston for the first three games of the season. That won’t do wonders for the Bucs’ chances of winning the division. Just take a look at their odds at the best sportsbooks for US players. Or it could be a blessing in disguise. Either of the Ryans could do a bang-up job. General manager Jason Licht certainly thinks it a possibility. “If Ryan Fitzpatrick, Ryan Griffin, whoever it is, is playing lights out, I don’t think it’s fair right now just to say, ‘Yes, automatically, [Jameis] is going to be the guy,'” he said. “Now, he may be. Dirk and I, Dirk in particular, he’s got some time to think about that.”

Odds taken from GTBets.eu, one of the best online sportsbooks out there. Give their mobile betting platform a try.