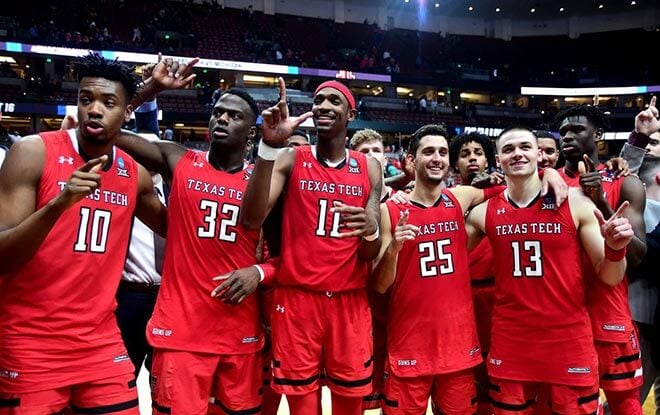 Some people may be surprised that the Texas Tech Red Raiders have gotten this far. But those people wouldn’t include those who have followed coach Chris Beard. The energetic, detail-oriented former Bob Knight assistant gets results quickly.  Just ask the folks at Arkansas-Little Rock about that (one season, 30 wins). And now he has his Red Raiders in the national title game. They do it by playing a brand of defense that is about as nasty as exists in the college ranks.

The opponents are the equally defensive-minded Virginia Cavaliers. And game time is 9 PM ET at U.S. Bank Stadium in Minneapolis.

We’d like you to sign up at BetAnySports. We think it would be worth your while. You’ll get reduced juice, as well as Live Betting Ultra, which enables real-time wagering.

Two slightly different defensive philosophies clash here. Virginia, with coach Tony Bennett, employs the Pack Line defense, which has some characteristics of a zone. Meanwhile, Beard is a guy who plays ferocious man-to-man. And that isn’t a surprise, considering his background includes coaching under Bob Knight, where “zone” was a dirty word.

Texas Tech will get out and pressure the ball. They don’t necessarily do that with a press, per se, but in the half court. They force an awful lot of turnovers. In fact, only ten teams in the nation have done it more frequently. We’re not sure if this will apply all that much with Virginia. You see, the Cavs are one of the least mistake-prone teams in the country. But with this comes a reticence to get those passes inside to attack.

Whether it’s the Pack Line or Beard’s defense, both teams want to clog the inside. That cuts off passing lanes that lead to easy baskets. It doesn’t mean people won’t try to penetrate. But if they don’t kick out for a triple they are going to be met by a crowd.

In the NCAA Championship betting odds at BetAnySports, Texas Tech is the underdog:

When we talk about that “crowd” you’re going to meet in the teeth of Texas Tech’s defense, shot-blocking has to be a factor. And from that standpoint, you would have to consider the Red Raiders to have the edge in 6-10 Tariq Owens. The St. John’s transfer averages 2.4 blocks per game. And that does not take into account the shots this jumping jack suppresses or alters. Yes, Mamadi Diakite fills that role for Virginia. But he doesn’t do it as effectively. And we doubt that 6-7 De’Andre Hunter, a future NBA’er, will find a lot of room in the lane.

Who will crack down the Pack Line for Texas Tech?

Well they aren’t as good as a lot of teams shooting the three (36.6%). But they may only have to be adequate, because of  6-6 Jarrett Culver, who may be the best player on the floor. And Matt Mooney can be a valuable support piece. The former Air Force player, who transferred from South Dakota, can be a big scorer. He proved that at his previous spot, and on Saturday as well, with 22 points against Michigan State. And he’s almost 39% from downtown. Davide Moretti is a 46% shooter from long-range. Between these guys, they can provide some balance. If they “brick,” however, they’ll have trouble. Remember Virginia will give you room to shoot threes. But you’ll need to make a respectable number.

Texas Tech contests everything – shots, passes, what have you. Are they “jelling” at the right time? Well, let’s try to illustrate it. In these last four games, they have held Buffalo, Michigan and Michigan State to their season low in scoring. And they held Gonzaga 19 points below their average. Keep in mind that the ‘Zags were the #1 team in the polls deep into the season. And they were the #1 offense as well.

And what else does Beard have to do to prove he’s one of the best at halftime adjustments? They have outscored every opponent in this tourney by at least eight points in the second half. They have held opponents to an average of 12.4 points in the first ten minutes of those second halves.

I’d say we have quite a case for the Red Raiders.

BetAnySports makes you the big winner in the NCAA Championship game. Get reduced juice to avoid the 11-to-10 on the basketball “vig.” Then access Live Betting Ultra for real-time wagering……. Deposits are a pleasure. You can use your Visa card. You can do person-to-person transfers. Or you can use Bitcoin, the virtual currency where you don’t pay ANY transaction fees!