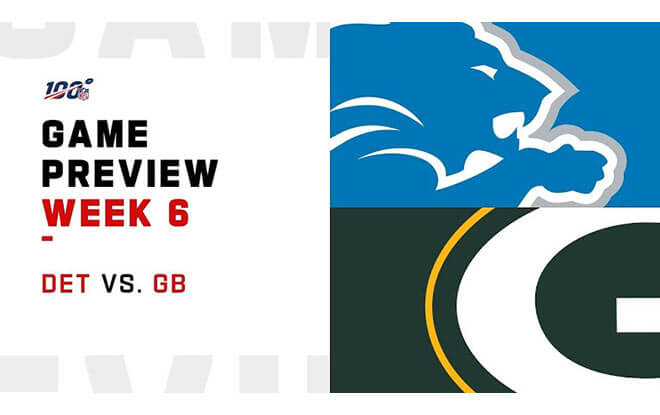 Before we move forward, allow us to assure you that these are not your daddy’s Detroit Lions. You know, the ones that knew nothing except throwing the football and didn’t play a lot of defense. These Lions are making some progress under Matt Patricia. And so they go into Lambeau Field on Monday night with some confidence. Their meeting with the Green Bay Packers will begin at 8:15 PM ET on ESPN. And remember that if you are a BetAnySports customers, you can watch the game and place wagers in real time with Live Betting Ultra.

It’s not so much that the Lions have been wildly successful running the football. It’s that they have demonstrated that they will not hesitate to do so. In fact, they’ve run it 45.4% of the time, and that is the seventh highest percentage in the NFL. That’s a big departure from what they had done under previous head coaches.

They certainly would like to get more efficiency than they have seen from Kerryon Johnson, who is averaging just 3.4 yards per carry. It is quite possible that they can get it moving against the Packers, who have surrendered 5.2 yards per rushing attempt.

The willingness to run has seemingly kept Matthew Stafford relatively upright, as he has been sacked only seven times.

As you can notice, these odds are infused with “reduced juice,” which gives you an opportunity, through BetAnySports, to avoid having to lay the standard -110 on football. It’s a great value – perhaps the best in the sportsbook business!

It was first-year coach Matt LaFleur’s intention to make life easier for Aaron Rodgers. But in the process of doing that he had to make some things a bit harder. He introduced some wrinkles that required more precision and perhaps less improvisation.

Rodgers is, of course, adapting. The Packers did a lot of what they wanted last week in Dallas, as A-Rod threw for 238 yards and Aaron Jones had 182 yards from scrimmage. But you have to wonder how efficiently the offense will continue to operate without Davante Adams, who is likely to be out this week with his turf toe injury.

Adams burned Darius Slay for 140 yards last year, so that is significant. And nobody in Green Bay’s wide receiver group did a whole lot last week.

Is it payback time?

Time was, the Lions couldn’t buy themselves a win at Lambeau Field. In fact, it had been a span of 24 years. But now they have won three in a row against the Packers. And that includes a 31-0 win at Lambeau last season in which Rodgers played only briefly.

Green Bay fans may want to be a bit concerned about the fact that they gave up 32 first downs and 563 yards of offense to the Cowboys, even with Ezekiel Elliott not having a big day. They were the recipients of three Dak Prescott interceptions, and that was a difference.

Interesting – Matthew Stafford has lost 55 of 64 against opponents over the .500 mark. But hey – maybe those were your daddy’s Lions. We feel comfortable taking the points.

And to make your Monday night REALLY complete…..

Sign up with BetAnySports and get reduced juice, so you save some money on the odds, along with Live Betting Ultra, which allows for real-time betting during the game……. And you have a chance to make deposits with the digital currency of Bitcoin, which is fast and easy and NEVER incurs a transaction fee!