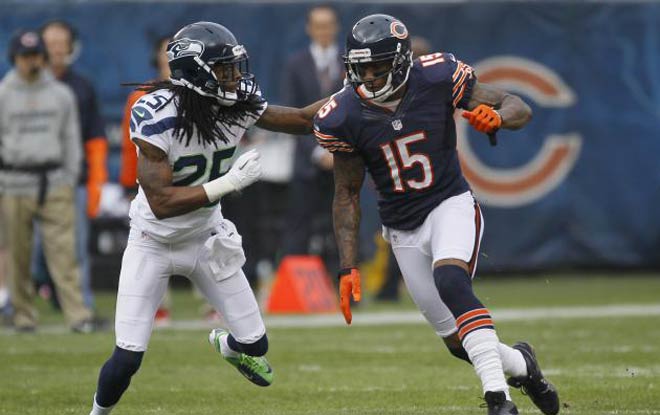 The Chicago Bears are field goal-favorites over the Seattle Seahawks, per the best online betting sites. And it’s not just the best online sportsbooks that are bullish on the Bears and bearish on the Seahawks. According to Lorin Cox of the NBC Sports.com, “77 percent of NFL experts are picking Chicago to get their first win of the season on Monday night against the Seattle Seahawks.” The source is NFL Pick Watch. And you know what they say about NFL Pick Watch; 60% of the time it works every time. Da Bears lost by just one point to Aaron Rodgers and the Green Bay Packers. Which is a moral victory. As well as an ATS win, and that’s even better. Meanwhile, Seattle lost 27-24 to the Denver Broncos as three-point dogs. What do they tell women in labor to do? That’s right, it was a push.

Broncos QB Case Keenum did all he could to make that game competitive. He threw three interceptions, which is about the only reason the ‘Hawks lost by only three points.

Much of Seattle’s prime time success is due to starting QB Russell Wilson. He is 19-4-1 SU with a 105.9 rating in prime time games. As well as 6-1 SU on Monday Night. However, wide receiver Doug Baldwin is expected to miss the Bears game with a MCL sprain. And he’s pretty much the only guy worth throwing the ball to in the Seahawks roster.

Head coach Pete Carroll has reported saying he would feed the rock to running back Chris Carson. The only problem is, the Bears held the Packers to just 69 yards on 18 attempts.

The Oakland Raiders should have made like Jerry McGuire and shown outside linebacker Khalil Mack the money. Mack and rookie and fellow linebacker Roquan Smith had a near perfect debut with the Bears. The only thing missing being the victory of course. But according to the best online betting sites for US players, that will change on Monday. Now if Mitchell Trubisky would only throw a touchdown pass.

Unlike the performers in the first season of SNL, the ‘Hawks are ready for prime time. Or are they? Seattle is 24-5-1 SU and 22-5-3 against the best online betting sites spread in their last 30 prime time games. Their show may just be about to get cancelled, though. The Seahawks have an offensive line only in the sense that their performance is an offense to the game of football. Wilson is like the laser cannon in Space Invaders when all the defense bunkers have been destroyed. Mack must be licking his chops. Long story short, take the Bears and the points.