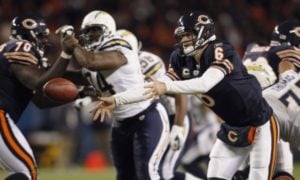 Both teams are struggling to get back on track this betting season, the Bears losing two of their last games and the Chargers lost their last four, is not good for bettors that take the money line on those teams.

Top sportsbooks are expecting some action on this game, where you will find the Chargers as -4.5-point favorites against the Chicago Bears and the Over/Under is set at 49.

The Bears are expecting to keep the good numbers of 5-1 straight up against the Chargers in their last six betting games since 1993.

No matter if they are a 4.5-point underdog on this match, they have good confidence in the team, Chicago is 0-5 SU in last five games as an underdog in the month of November.

Chicago lost 23-20 in their last meeting with the Minnesota Vikings and they don’t cover the betting spread as underdogs on that occasion.

Some injury players for Chicago are Matt Force (knee), Eddie Royal (knee), the only good news that they have is that Pernell McPhee returned to practive this week; couple questionable players are Jermon Bushrod (shoulder) and Zach Miller (shoulder).

For San Diego Chargers the list is more extensive than the Bears and they are worry about the consequences that this could do.
Their list of “out” players started with C Chris Watt (shoulder), T King Dunlap (ankle), ILB Denzel Perryman (biceps), ILB Manti Te’o (ankle), the doubtful players are TE Ladarius Green (ankle) and OG Orlando Franklin (knee).

San Diego quarterback Philip Rivers have a very hard task this Monday, he passed 3 touchdowns and totaled 302 yards passing last Sunday against the Ravens but anyway they lost 29-23 on that match, they were +4.5-point underdogs on that occasion.