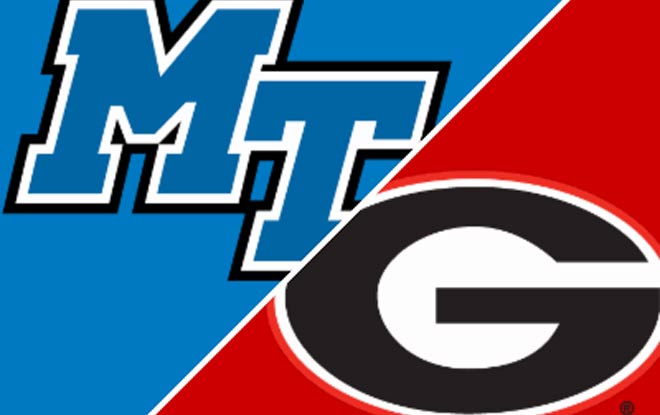 Online sports betting sites might just be a bit off regarding the Georgia Bulldogs. UGA shut out Austin Peay 45-0 and still fell one point short of covering the spread. The following week the best online sportsbooks favored them by just eight points. The Bulldogs scored enough points on South Carolina to cover that spread three times over. Meanwhile, the Middle Tennessee Blue Raiders have responded just as expected. They lost SU and ATS as three-point dogs to Vanderbilt. Then they won and cover as 19-point faves in a 61-37 win over Tennessee-Martin. Which brings us up to speed. On Saturday, Georgia is a 33-point favorite versus MTSU.

MTSU began selling alcoholic beverages at Floyd Stadium during the UT Martin game. It’s too bad the Georgia game won’t take place there. I have an inkling, as online sports betting sites do, Blue Raiders fans will be in need of a stiff drink. Well, maybe they sell booze at Sanford Stadium too.

Two of MTSU’s wide receivers are starting to break out at just the right time. Patrick Smith had a school record-tying three TDs. And CJ Windham had two in the first half. The position had been lacking in the depth department. Ty Lee and Brad Anderson seemed to be doing all the work. As long as it was a fluke, this provides quarterback Brent Stockstill with two more much needed targets. And speaking of Stockstill, he struggled early to find his rhythm. However, he finished with 407 yards and five TDs.