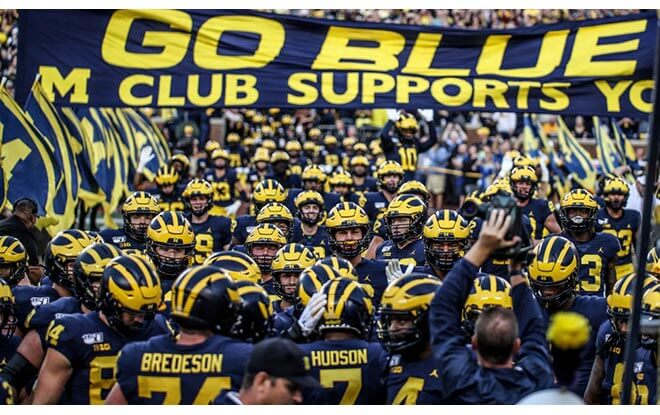 The Spartans continued their lousy season with a 34-37 loss to Illinois last weekend. The best online sportsbooks had MSU as 15.5-point home chalk, but nothing doing. Starting QB Brian Lewerke went 19 of 36 for 251 yards with one TD and three picks. He added 98 yards on the ground and another TD. Wide receiver Cody White had 128 yards on seven receptions.

Running back Elijah Collins had 170 yards and two TDs on 28 carries. Michigan State’s defense allowed just 36 rushing yards but 369 through the air.

“The future of the 13th-year coach and his program have taken center stage during the Spartans’ four-game losing streak and second straight season of offensive misery. The concern spiked in Saturday’s second half against Illinois, when many of the things Dantonio built his program on vanished. Sound fundamentals. Assignment responsibility. Finishing strong. Exuding confidence. All gone — another repeat of fourth-quarter issues that have plagued MSU since the start of the 2018 season,” reports the Detroit Free Press.

The Wolvies clawed their way through Maryland 38-7 in their most recent outing. UM was, per sportsbook sites, 21.5-point road favorites. Starting QB Shea Patterson went 13 of 22 for 151 yards with one TD. Wide receiver Nico Williams had 65 yards on two catches. Running back Hassan Haskins had 60 yards and one TD on 13 carries.

“Michigan’s players who grew up out of state might not have understood the intensity of the rivalry before they got to Ann Arbor, but they were quickly immersed as soon as they arrived on campus. “It just becomes personal and you really pick up that feeling and how historical this game means to the program when you step foot here as a freshman,” said Michigan senior defensive tackle Carlo Kemp, who attended high school in Colorado.

“You have your older guys, you have your group of seniors who have been in this game for four years, and you have a bunch of guys from Michigan who know that rivalry, know the tradition. You are here and you pick that up.” The intensity of the game also has led to some players developing personal rivalries against the Spartans,” writes Mlive.com.

Looking up stats for this game, I’m stunned by the discovery that Michigan State has the No. 24 total defense in the country. Surely this is a mistake? But let’s assume it isn’t. How good was this defense through the first five games of the season? It had to be extremely good to still be among the top 24 after allowing 34.2 points per game in the last four contests. By way of comparison, Louisville allows 34.1 points per game. And they have the 112th-ranked scoring offense in the country. If this continues, even Michigan’s middle-of-the-road offense can cover this spread.