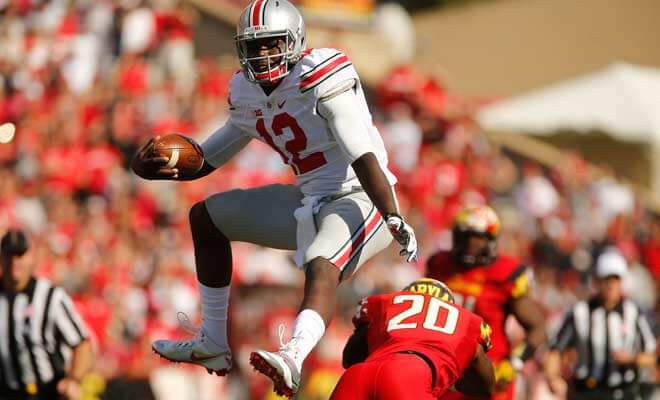 The No. 1 Ohio State Buckeyes are 43-point home faves over the Maryland Terrapins, per online USA sports betting sites, for their NCAAF game on November 9 at 12:00 p.m. ET at Ohio Stadium in Columbus, OH.

The Pins lost their fourth straight game and sixth of their last seven last weekend, 7-38 to Michigan. According to the best online sportsbooks, UMD was a 21.5-point home dog for that one. That means the Terrapins failed to cover for the second straight time third of the last four. QBs Josh Jackson and Lance LeGendre combined for 22 completions out of 10 attempts. For 104 yards with no TDs and one pick. Brian Cobbs and Chigoziem Okonkwo combined for 78 yards on six receptions.

Anthony McFarland Jr. and LeGendre combined for 99 yards on 21 yards. Get the point? All of the Pins combined efforts did not amount to much. On defense, Maryland allowed 331 yards, 176 passing, and 155 rushings. UMD ranks 86th in total offense (384.4 yards per game) and 85th in total defense (413.8 yards allowed per game). That is to say, they are mediocre on both sides of the ball.

The Terrapins are 1-4 ATS playing a team with a winning record. And 5-16 ATS in their last 21 road games. The over is 7-2 in Maryland’s last nine games after a double-digit home loss.

The 43 points set by online USA sports betting sites “the largest spread Maryland’s faced since joining the Big Ten in 2014. Ohio State (8-0 overall, 5-0) has been torching all comers, while Maryland’s losing streak grew to four — and five losses in its past six games — with a 38-7 homecoming loss to Michigan. Ohio State has won all five games between the two schools, all of them after Maryland joined the Big Ten, and has scored at least 49 points in each. The only non-blowout was that near-upset last year in College Park when Maryland fell short on a failed two-point conversion in overtime and lost 52-51,” reports 247sports.com.

What are you doing here? Do you really need a tip as to how to bet on this game? Are you serious, bro? Are you really going to make me say it? Take the Ohio State Buckeyes and the points, obviously.