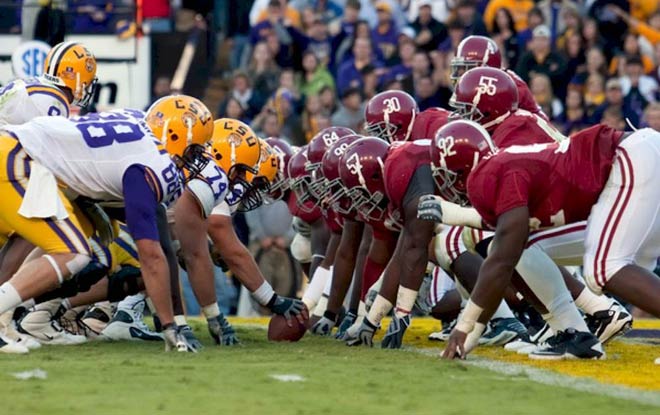 The No. 3 Alabama Crimson Tide are 6 -point home favorites over the No. 2 LSU Tigers, according to the top betting sites, for their Week 9 NCAA football game on November 9 at 2:30 p.m. CT at Bryant–Denny Stadium in Tuscaloosa, AL.

The Tigers won their eighth straight game, 23-20, over Auburn last weekend, to remain unbeaten this season. However, as, per the best online sportsbooks, 11.5-point home faves, LSU failed to cover the spread. Starting QB Joe Burrow went 32 of 42 for 321 yards with one TD and one pick. Running back Clyde Edwards-Helaire rushed for 136 yards on 26 carries with one TD. Wide receiver Ja’Marr Chase had 123 yards on eight receptions. LSU outgained Auburn 508 total yards to 287.

Tom Fornelli thinks LSU should be ranked No. 1 in lieu of Ohio State. “While [he] would make the argument that Ohio State has played better than LSU, its best wins are No. 13 Wisconsin and No. 20 Cincinnati. LSU has wins over No. 10 Florida and No. 11 Auburn, as well as a road win against unranked Texas. So the Tigers have two wins better than any win Ohio State has by the committee’s own ranking yet are behind the Buckeyes.”

The Tide is also undefeated this season, as they are wont to. Their latest victim was Arkansas, whom ‘Bama crushed 48-7 as 32-point home chalk, per top betting sites. In mixed news, they did it without the Samoan Bulldozer Tua Tagovailoa, who is still nursing an injured ankle. Backup Mac Jones went 18 of 22 for 235 yards with three TDs. Two which were aimed at Jerry Jeudy, who finished the game 103 yards on three catches. Najee Harris and Brian Robinson Jr. combined for 153 yards on the ground.

Harris also scored two rushing TDs. Even sans the Hawaiian Behemoth, the Tide still ranks 5th in passing offense with 338.6 yards per game. The Leviathan of the South Seas did watch his kid brother Taulia passed 6 of 8 for 45 yards. Awwwww! They grow up sooooo fast! The defense intercepted opposing QB Nick Starkel three times. And held Arkansas to 213 total yards.
Alabama is 7-2 ATS in their last nine games after a bye week. And 0-5 ATS in their last five home games playing a team with a winning road record. The under is 8-1 in Alabama’s last nine games after a bye week.

As well as Jones acquitted himself, the Polynesian Polyphemus is expected to “play against LSU on Saturday and that he’ll likely look healthier and less limited than what most outsiders are probably expecting. Rehab and recovery have gone very well for Tagovailoa, who is now 16 days removed from undergoing surgery to repair the high-ankle sprain he suffered against Tennessee,” reports AL.com.

LSU is realizing the full potential of head coach Ed Orgeron’s vision. But Alabama is Alabama and Tagovailoa is Tagovailoa. I’m not saying that LSU is going to upset ‘Bama. I will say, though, that if any school can do it during the remainder of the regular season, it’s LSU.