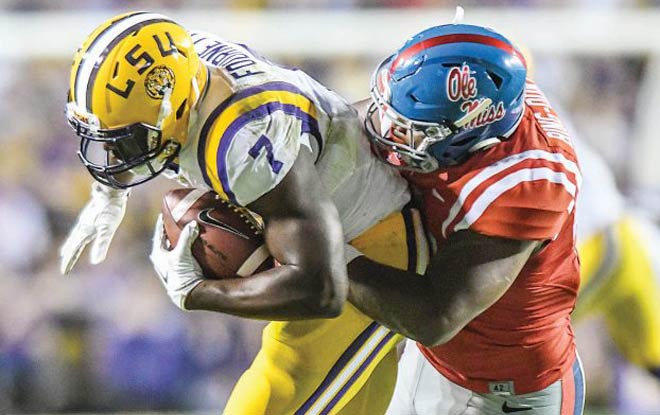 Sport betting app sites are favoring the LSU Tigers by 11.5 points over the Ole Miss Rebels. This will be the 107th edition of the Magnolia Bowl. LSU has won six of the last eight encounters. Including the last two by a combined margin of 16.5 points. It will not be much different this year. Especially if you ask the best online sportsbooks. And The Advocate’s writers agree. “Ed Orgeron has said the coaching staff wants the offense to be more explosive,” Brooks Kubena says. “Well, Ole Miss is the team to explode against,” noting that while LSU is no Crimson Tide, the Tigers’ new and improved ground attack can do a lot of damages to the Rebels.

Sheldom Mickles also brought up the Tide. “The last time it faced a top-five team, Ole Miss was hammered by No. 1 Alabama and lost by 55 points. This one won’t be nearly as painful” but it will not be pain-free. Perhaps it isn’t such a good idea to name-drop Alabama. Everyone suffers by the comparison.

The Rebels’ secondary is practically non-existent. The Ole Miss defense allows more than 500 total yards per game – more than 300 passing and almost 200 rushing. As expected, the Crimson Tide had the game against Ole Miss solved pretty much in the first quarter.

Starting QB Joe Burrow has three TDs on 731 passing yards, and a 49% completion rate. Clearly, the Tigers’ strength is the ground attack. Running back Nick Brosette has 409 yards on 83 attempts. And more 100 yards on more than 20 carries per game. Way to go, Bro! Yet, LSU collectively averages just 169.8 rushing yards per game. But one of the reasons sport betting sites favor the Tigers is Ole Miss’ weak run defense.

On the one hand, LSU’s stout secondary plus Ole Miss’ vulnerable defense might allow the Tigers to cover the sport betting sites spread. The Rebels sharp offense could conceivably keep Ole Miss within the 11.5 points. Perhaps a safer bet is the over. The Rebels have allowed more than 40 points in three of their four games. But their offense can dish it out as well as their defense takes it.