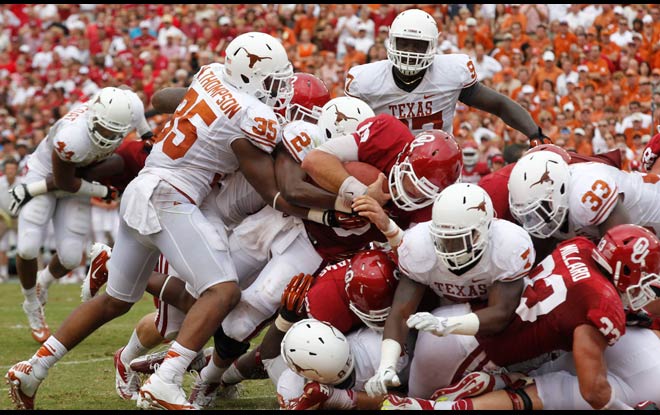 The legal sport betting spread favors the Oklahoma Sooners by 7.5 points over the Texas Longhorns. This will be the 113rd edition of the Red River Showdown. The Sooners have won six of the last eight meetings. Including the last two straight, both by five points. Oklahoma is coming off a big 66-33 win over the Baylor Bears. The best online sportsbooks favored the Sooners by 21.5 points and QB Kyler Murray didn’t disappoint. Well, he disappointed head coach Lincoln Riley by arriving late to practice. As a result, Murray didn’t start the game. Nonetheless, he still found time to throw for six TDs on 432 passing yards. He also made time to run for 45 yards and another TD on 10 carries. Murray is the only college football player averaging at least 250 passing yards and at least 50 rushing yards per game.

He also leads the country in yards per pass attempt and yards per completion, second in passing efficiency rating and points responsible for, third in passing touchdowns, fifth in total offense per game and 10th in passing yards and completion percentage. He hustles a lot but will have plenty of time to rest when he’s standing around doing nothing on a baseball field.

The Sooners have been running roughshod through the competition. There’s one caveat, though. That competition has not included a ranked team. Until now, that is.

Murray has passed for 17 TDs and just two picks. And he has run for four TDs on 285 yards. He may seem him passing more than running though, against a defense that allows 218.2 yards through the air and 115 yards on the ground.

Oklahoma allows its fair share of passing yards as well. That could help Longhorns QB Sam Ehlinger to improve his modest 139.7 passer rating. That’s almost 100 fewer points than Murray, who is Heisman legal sport betting favorite. Ehlinger will most likely continue his association with targets Jordan Humphrey or Collin Johnson. The two account for almost half of Texas’ receptions. On the ground, Tre Watson and Keontae Ingram will try to make the most of the Sooners’ 96th-ranked run defense.