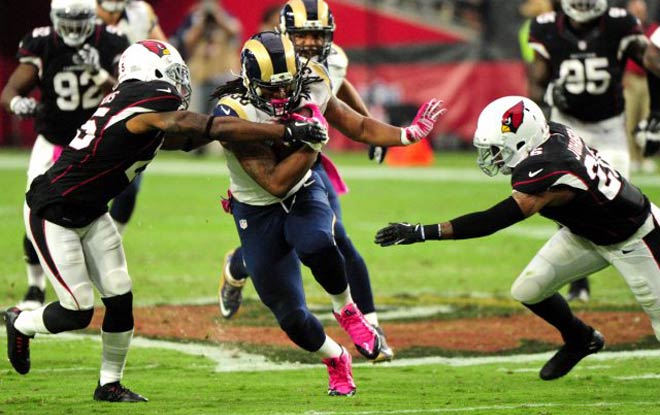 According to Las Vegas sports betting online, the Los Angeles Rams are 13-point favorites over the Arizona Cardinals. The Cards crashed and burned as home faves in a game where the Redskins covered the spread nine times over. ‘I Am’ Sam Bradford went 20 of 34 for 153 yards with no TDs and one pick. Also, he was sacked twice. This Sunday it’ll be a sort of homecoming for Bradford. Even though the game is in Los Angeles instead of Saint Louis. The St. Louis Rams selected Bradford with the first overall pick in the 2010 NFL Draft. That didn’t go off too well. Go off? Goff? As in Jared Goff? Words are fun!

Bradford’s season is just about to get a lot worse. Rams defensive tackle Ndamukong Suh has made it a mission to beat the snot out of the Cards QB. Suh was the second overall pick of the 2010 draft. And he has ever since held a grudge against Bradford for being picked first. That’s commitment.

Speaking of the Rams defense, let’s look at another Las Vegas sports betting online trend. According to the best on line sportsbooks, the total has gone under in five of the Rams’ last seven games at home.

Our Prediction: As a No. 1 draft pick by the Rams, Bradford is no Jared Goff. And as a Cardinals starting QB, he’s no Carson Palmer. He’s just plain ol’ Sam Bradford. Sadly, that’s not enough to keep up with the Horned Ones. Let’s go with the Rams and the points.