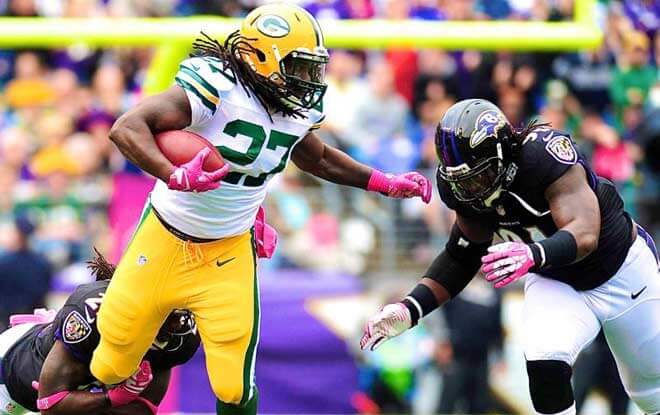 The Minnesota Vikings are three-point home favorites against the Green Bay Packers, sports betting websites tell us. This could be a make-or-break game for both teams. “Let’s say the Vikings win and improve to 6-4-1. They would feel a lot better about their playoff chances than they do now — where as it stands the division is slipping out of reach,” Michael Rand of the Minneapolis Star Tribune writes. “A Packers loss, meanwhile, would drop them to 4-6-1 and deal them a blow in the playoff race. But let’s say the Vikings lose and fall to 5-5-1 — same as Green Bay, in this scenario. Green Bay would win any two-team tiebreaker for the division or wild card against the Vikings with a win and tie on its resume in head-to-head meetings.” It’s what we in the best online sportsbooks biz call a must-win game. For Packs and Vikes alike.

Starting QB Aaron Rodgers has 40 TDs and six picks in 20 starts against the Vikings. He has a 110-7 passer rating versus Minnesota. Rodgers is posting 307.5 passing yards per game, helping Green Bay to rank 7th in yards through the air. He leads the NFL in 40+ yard passes with 14. Finally, he has thrown 19 TDs and just one interception this year. According to sports betting websites, the Packers are 0-7 SU and 1-5-1 ATS in their last seven games on the road. They have lost those games by an average of 10.2 points. The Packers are also 1-4 ATS in their last five divisional games. Getting their first road win won’t be easy against arguably the best defense in the league. But if someone can get the job done, that’s Aaron Rodgers.

The Vikings have only broken the 30-point barrier twice this season. As a result, they rank No. 15 in points per game (24.1). They also rank next-to-last in rushing yards per game (84.7) Starting QB Kirk Cousins has kept the offense alive with 2947 passing yards. He has thrown as many TDs as Rodgers (19). However, Cousins has also thrown seven picks. What it all boils down to is that the defense is keeping the Vikes afloat. Minnesota ranks 5th in total yards (320.8), 6th in passing yards (226.0), and 4th in rushing yards (94.8) allowed per game. Nevertheless, this defense drops from the top 10 in points allowed per game (22.9).

Our Prediction: Pertaining Rand’s words. It’s clutch time for the Packers. And no one delivers better at clutch time than Aaron Rodgers. As users of sports betting websites surely remember, Green Bay was 4-6 by Week 11. Rodgers then pulled out six straight wins out of hammerspace. As a result, the Packers clinched a wild card berth and went all the way to the conference championship game. They didn’t make the postseason last year, but then Rodgers only played seven games. And there’s the fact that Rodgers is invariably money against Minnesota. I think it’s safe to fade the Vikings on this one.