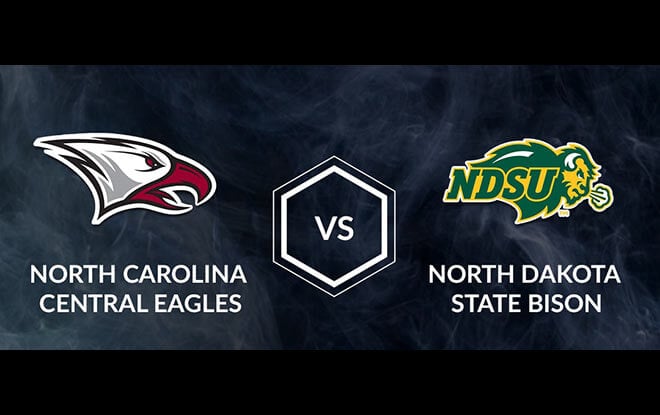 The North Dakota State Bison are 5-points favorites over the NC Central Eagles, per the best USA betting sites. The Bison posted a season 18-15 record (9-7 in The Summit play). However, NDSU failed to cover the spread in 16 of those games. On the plus side, the Bison won and covered in the championship game, a 73-63 win over Nebraska-Ohama. The Eagles went 18-5 this season (10-6 in MEAC play). In addition to that, NCCU covered the best online sportsbooks point spread in 18 games. Including a 50-47 SU and ATS win over Norfolk State in the MEAC championship game. The NCAA selection committee awarded the Eagles a No. 16 seed. The winner of the NC Central-North Dakota State will move on to face the powerhouse Duke Blue Devils. In spite of which I firmly believe both Eagles and Bison will do their best to prevail.

If these were legal Eagles, they would be the defense and not the prosecution. NCCU allowed just 66.3 points per game, which was the best scoring defense in the MEAC. Furthermore, they held Norfolk State to just 34% field goal shooting in the championship game. Finally, NC Central’s over/under is 13-17 this season. Including their last six games, which have averaged 127.3 total points per game. North Carolina Central is 7-1-2 ATS in their last 10 games overall and 3-1-2 ATS in their last six after an ATS win, according to the best USA betting sites.

The Eagles would love a chance at retribution against the Blue Devils, but they’re not looking past the Bison. “First order of business is North Dakota State,” head coach LeVelle Moton said. “It would be wonderful to face Duke. Obviously it would be a huge challenge, but everything at this point is going to be a huge challenge for us, so we await the challenge.”

This will be the Bison’s third straight NCAA tournament appearance. Which did not seem like it was going to happen following a slow start. “The guys in the locker room never lost track of what the mission was at the end of the season,” Shahid said. “We knew everything that happened, happened for a reason. And we knew that going forward what we had to do to fix the record. We are a process-based team so we weren’t really worried about the results at that time in the locker room. We knew that if we kept doing the right thing at the right time that good things would happen.”

Pick: Contrary to what its name might suggest, The Summit League by no means comprises the cream of the crop. That being said, the Mid-Eastern Athletic Conference is not elite by any stretch of the imagination either. If you put a gun to my head, I’d take Bison to cover. Nevertheless, both schools are of a more defensive persuasion. Whether that has to do with the quality of their respective conferences is immaterial. The point is that the under is the smart bet for customers of the best USA betting sites.