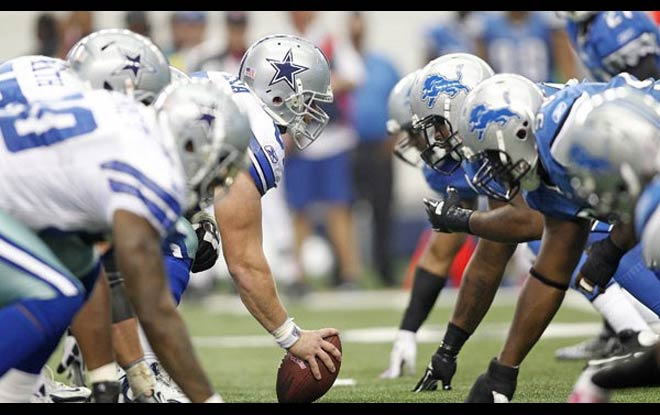 The online legal sports betting sites spread says the Dallas Cowboys are field-goal favorites against the Detroit Lions. Are the best online sportsbooks aware that the Lions just defeated the New England Patriots? That should make them the odds-on favorite to win the Super Bowl and the World Series. Detroit held New England to just 10 points and 209 offensive yards. And the Cowboys offense is nothing special, either. The Dallas brass is probably regretting releasing Dez Bryant. They also probably wish Jason Witten hadn’t retired. Lions running back Kerryon ‘Sergeant’ Johnson had 101 yards on 16 carries. However, he will go up against a Cowboys defense that is about the team’s only saving grace. Dallas’s secondary has allowed just 53 points through three games.

Starting QB Matt Stafford has thrown 304.5 yards per game, five TDs and just one pick in the last two games. It may sound redundant, but the more TDs Stafford throws, the better the Lions’ chances of covering the online betting sports spread. Detroit is 17-47 SU and 17-45-2 ATS when Stafford throws one or no touchdown passes. On the other hand, the Lions are 44-25 SU and 40-27-2 ATS when he throws two or more touchdowns.

The Cowboys will be missing linebacker Sean Lee. Which is good news for Johnson. Or LeGarrette Blount. Or whoever gets the most carries.

Running back Ezekiel Elliott is posting 91.3 yards per game and 5.7 yards per carry (including 7.9 ypc against Seattle). The Cowboys are 15-5 SU when Elliott records 90 or more rushing yards in a single game. Conversely, they are 13-7 ATS under those same circumstances.

Zeke is literally the go-to guy in Dallas’ offense. Dak Prescott’s only option other than to give Elliott the ball, is throwing it to Cole Beasley. The stage is set for Zeke to have a big game. However, as much damage as he can and probably will do to the Lions, there’s always a nagging question. How much more yards and TDs could he produce if the Cowboys had a decent offensive line?