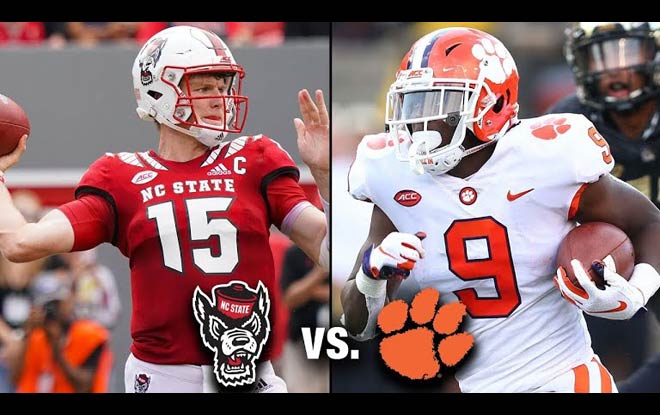 USA Sportsbook sites favor the Clemson Tigers by 17.5-points over the NC State Wolfpack. These are the only two ranked schools in the ACC. However, there has been a great divide between them, and the best online sportsbooks are well aware of that. Clemson has won the last six editions of the Textile Bowl. As well as 13 of the last 14. NC State came close the last couple of years. The Wolfpack lost by just seven points in overtime in 2016. And again by seven points in 2017. More often than not, though, the Tigers has breezed past the Pack. Both programs come to their annual meeting undefeated. Although NC State has one game fewer, since the game with West Virginia was canceled due to Hurricane Florence. Additionally, they are both coming off their respective byes. The winner of this game will stake a huge claim to the ACC Atlantic Division.

The Pack arguably has the best QB in the ACC. Ryan ‘Fit’ Finley leads the conference in passing yards, completed passes, and completion percentage. This could be construed as a double-edged sword, since it might be the reason NC State has somewhat neglected the running game. ‘My Name is’ Finley ‘and I Love to Pass’ had three TDs and two picks on 338 yards through the air in last season’s losing effort. As a whole, the Pack’s offense has an average of 425.6 yards and 29.6 points per game in the last three Textile Bowls. That’s what we in the sportsbook sites biz call “close but no cigar.”

Trevor Lawrence is the reason I used the word “arguably” when I said Finley is the best QB in the ACC. The Clemson QB has the best rating in the conference and is second in completion percentage. However, he has been sacked four times compared to Finley’s two. Nonetheless, if he can exploit the Pack’s weak pass defense, Lawrence could position himself as the best in the ACC.