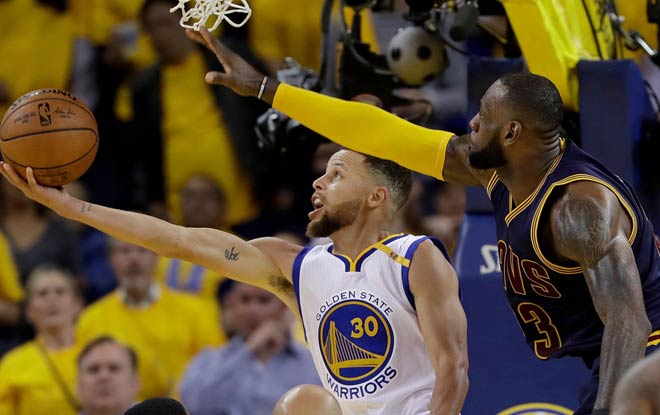 As far as the top online sportsbooks are concerned, the more things change the more they stay the same. The Cleveland Cavaliers are minus one Kyrie Irving (who, like Achilles, paid the price for his hubris). Other than, the song remains the same, as Led Zepp would say. The Cavs and the Golden State Warriors are meeting for their annual championship showdown, predictably. The Warriors are the favorites to once again lift up the trophy, predictably. The Dubs have home court advantage, and predictably, made good use of it, winning game 1 at Oracle Arena. And now, without further ado, let’s dive on in some NBA Finals game 2 goodness. Or, as LeBron James and Stephen Curry call it, game 20 of their best of infinity series.

Like the title of Jerry Lawler’s autobiography, it’s good to be the king… sometimes. LeBron dug as deep as only he can and produced a 51-point performance. To say that he single-handedly could have upset the Warriors in their own turf wouldn’t be hyperbole. Well, maybe it would be. Just a little bit. But only because he didn’t make the would-be game-winning shot. As a matter of fact, no one made it. JR Smith should have, in good theory, made that shot. Instead, he grabbed the ball that George Hill bounced off the rim from the free-throw line. He then proceeded to burn off the five seconds remaining in regulation. As if the Cavs were ahead. Which he thought they were. D’oh! If LeBron were an actual king, you know Smith’s head would have rolled. Long story short, the game went into overtime and the rest is, as they say, history. The takeaway is, bettors can always count on James to pull out at least a straight-up win out of nowhere. The question is, though, can he himself count on his teammates?

On the other hand, the Warriors didn’t win game 1 so much as that the Cavs lost it. What the Dubs do have going on for themselves is the strength of their core. Individually, Curry’s 29 points didn’t hold a candle to LeBron’s 51. Collectively, however, the Warriors is the closest there is to an All-Star team this side of the All-Star game. And while their bench isn’t as deep as it once was, Andre Iguodala’s absence wasn’t felt as much it might have. And the credit for that goes to Shaun Livingston. He posted 10 points on 4-of-4 shooting, three assists, two rebounds, and one steal in 18 minutes on Thursday.

These odds come from Intertops, one of the best online sportsbook websites out there.

Prediction: This will most likely be another close. Moreover, LeBron must have given Smith a good talking-to. Which the rest of the team hopefully listened to as well. But even if the Cavs don’t make mistakes, that doesn’t necessarily guarantee success. At least not against the Warriors.