Can the San Francisco 49ers Win the Super Bowl 54? 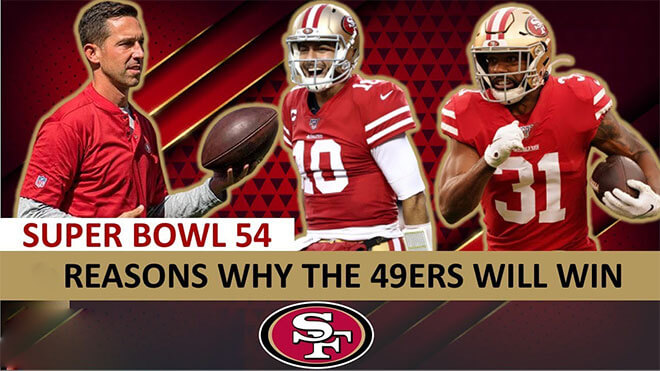 The San Francisco 49ers are, according to top sportsbooks, one-point underdogs versus the Kansas City Chiefs at Super Bowl LIV. Can the Niners overcome these odds and win the game? Yes. Yes, they can. Whether they will is another matter entirely. The point is that San Francisco can certainly sneak up on Kansas City. Because the 49ers are deceptively good. As is their starting QB Jimmy Garoppolo. Jimmy G. and head coach Kyle Shanahan are taking a lot of flak because of the NFC championship game.

Which the Niners won by 17 points. As, per the best online sportsbooks, eight-point home chalk. That means they covered the point spread twice over. That criticism is not that they won but how they won. They absolutely destroyed the Green Bay Packers on the ground with 285 rushing yards. Of which 220 were gained by Raheem Mostert.

Apparently, they should have passed more. For some unfathomable reason, they should have exchanged some of those perfectly good rushing yards for passing yards. Because they somehow need to prove that Garoppolo is a good QB. And that Shanahan is not afraid to have him pass the ball.

He can and he has. That right there partly answers the question can the 49ers beat the Chiefs. And it also goes quite a way in answering how. Not that that matters, though. Betting websites make no distinction as to how a team covers a spread. And if they do, those that do are not among the top sportsbooks.

Speaking of Mahomes, no one is ripping on him for only rushing for 53 yards against the Titans. Or the Chiefs in general for “only” gaining 112 yards on the ground. But the same logic applies. Kansas City did not run the ball more because they didn’t need to do so to win the game. Shanahan has lashed out at critics as well. “I think it’s really funny that people say that. Does anyone notice how good we were running the ball? We weren’t just running it to punt and try to win 3-0.”

Are the Niners afraid to put the game in his quarterback’s hands? Would they rather run the football than throw it? The answers are no and no. but they could be yes and yes and it would make little or no difference. In fact, for the sake of argument, let’s say it’s all true. The 49ers are a bunch of sissies. Especially Garoppolo. And they are all coached by an even bigger sissy.

So what? That just means the Packers were beaten by a pack of sissies. A pack who could very well beat the Chiefs as well. And if they do beat Kansas, they will most likely do it the same way they beat Green Bay. If you want to put an asterisk on that, go ahead. Top sportsbooks would pay those who bet on San Francisco regardless.