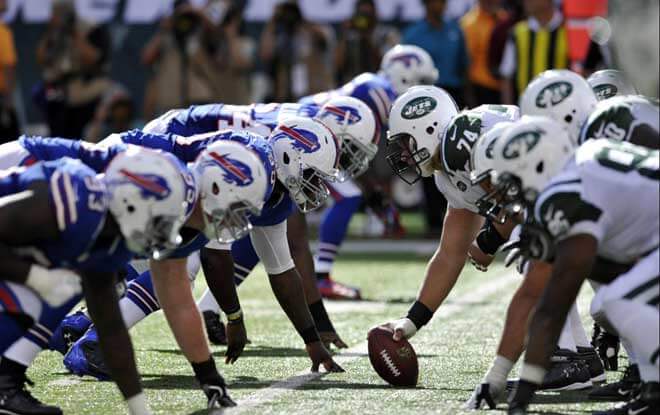 The New York Jets are 3 -point home favorites over the Buffalo Bills, per the best online betting sites. Perhaps the best online sportsbooks are bit taken with the Jets’ new uniforms. It reminds me of a beloved tale by Danish writer Hans Christian Andersen. The one about two weavers who promise an emperor a new suit of clothes. A suit that they say is invisible to those who are unfit for their positions, stupid, or incompetent. The suit of clothes is of course nonexistent, but the emperor nonetheless pretends he can see it. And pretends to wear it. So don’t be surprised if you see new Jets head coach/general manager Adam Gase walking around New York fully naked.

I don’t understand. Why even bother firing Todd Bowles if you’re just going to go and hire Adam freakin Gase? Gase used to “coach” the Miami Dolphins. Coincidentally, an actual dolphin is not only smarter but would do a better job.

Speaking of fairytales, the Bills are NFL.com columnist Adam Schein’s “official Cinderella team for 2019.” Last season, Schein “felt [starting QB Josh Allen] oozed rare talent.” There are ointments for that, you know. He adds that “many savvy NFL executives whispered that he was the top dog in a special quarterback class.” Well, he was indeed teammates with Nate Peterman. And Peterman certainly is special. Special like Corky in Life Goes On. Seriously though, Allen didn’t put up the numbers to back up Scheins’s claims. Which he waves aside by telling us that Allen has “intangibles”. Schein, however, does have a point. And it’s the fact that the Bills are building a team around the young QB. First off, they have signed six new offensive linemen. Including Mitch Morse, Ty Nsekhe and Quinton Spain. Additionally, wide receivers Cole Beasly and John Brown are a couple of new targets for Allen.

According to the best online betting sites, Buffalo went 5-6 SU and 6-5 ATS in 11 Josh Allen starts.

The Jets are pretty much in the same QB situation as the Bills. Just replace Josh Allen with Sam Darnold. Both debuted in 2018, were thrust into the spotlight, and struggled with injuries. And both are expected to make a major qualitative leap in their sophomore season. Darnie is at a disadvantage, though. Not only has he got to learn a new offensive system. But he has to learn it from (egads!) Adam Gase. Talk about your double whammy. As a result, Darnold has been studying Peyton Manning films. Though he has hopefully skipped Ferdinand. Manning threw 55 TDs on 5477 passing yards in 2013 in Denver with Gase as offensive coordinator. I’m pretty sure Gase was like the “magic feather” in Dumbo.

“He asks a lot of questions about Peyton [Manning], obviously,” Gase said of Darnold. Will there be a meeting between Darnie and Manning? “If it ends up happening, that’s great,” Gase said. “Hopefully I can eventually. I just try not to bug Peyton too much. I feel like I’ve asked enough of him already throughout my career.” Is it just me, or is Gase the Jerry Lewis to Peyton’s Dean Martin?

Expert Predictions for Bills vs. Jets

These two teams are to me a lot closer than a field goal. Come Week 1, Allen will simply be more familiar with Sean McDermott’s system than Darnold with Gase’s. Speaking of whom, I just don’t trust Adam Gase. Didn’t trust him with the Dolphins, don’t trust him with the Jets. Mind you, users of the best online betting sites can feel free to fade me. But I have a hunch that Gase is going to screw the pooch, as is his wont.