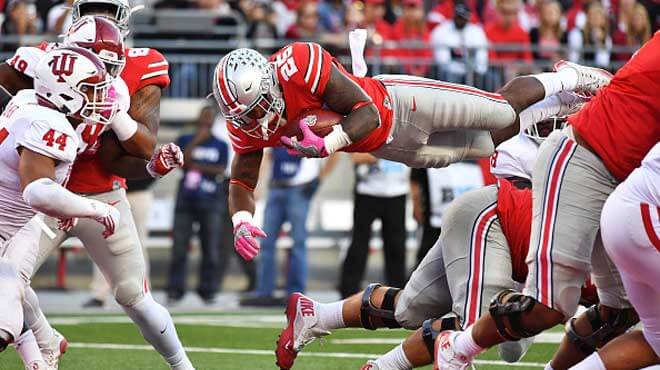 One of the most intriguing championship matchups of the year is upon us. And quite coincidentally, it is also offering some of the best and most lucrative gambling website action of 2017. The Ohio State Buckeyes, currently ranked No. 8 in the nation, will face off against the third best team in the nation this Saturday as the Buckeyes will go toe to toe with Wisconsin. The Badgers competed in the Big 10 Championship last season but ended up losing a tough 31-38 matchup to the Penn State Nittany Lions. Will US sportsbooks predict another loss for the Badgers?

No. 8 Ohio State rolls into this Saturday’s championship pairing sporting a 10-2 record that ranks them No. 1 overall in the Big Ten – East standings, thanks to the 8-1 record the program has posted in conference play this season. The Buckeyes haven’t faced Wisconsin this season and it is interesting to see how much NCAA Football bookmakers are favoring Ohio State over Wisconsin, despite the fact that the Badgers have a better record and are currently ranked high in the national rankings. Ohio State enters this Saturday’s contest riding a 3-game win streak and will be looking to sneak into this year’s postseason by upsetting No. 3 Wisconsin.

US sportsbooks are likely favoring the Buckeyes over their higher ranked opponent due to the explosiveness of Ohio State’s offense. The Buckeyes are putting up a whopping 43.8 points on offense as well as an astounding 529.8 yards. For comparison, the Badgers are only putting up 34.8 on offense and are gaining 426.0 in total yards. However, Wisconsin does have the better defensive unit as the Badgers are only giving up 12.0 points on defense and 236.9 yards. The Buckeyes are a tad bit less impressive as they are allotting 19.8 points to their points as well as 291.8 yards. But, all things considered, is the Buckeyes slight advantage on offense enough to rank them as a favorite over Wisconsin?

The Wisconsin Badgers have quite literally badgered their way into this championship game by posting an undefeated 12-0 record throughout the regular season. Naturally, such a stellar record is going to give the Badgers the lead in the Big Ten – West standings. As aforementioned, Wisconsin lost out on last year’s Big Ten Championship and will be doing all they can to redeem last year’s failure. The Badgers last took to the gridiron to face the unranked Minnesota Golden Gophers in a dominant 31-0 performance. Players looking for an NFL betting guide for this weekend’s championship action should stick to betting on the Badgers. Since Wisconsin is pegged as an underdog, there is an extremely lucrative payout on the Buckeyes’ straight up.

College football players betting on this weekend’s action should certainly take the Badgers straight up. The Badgers are a better all-around team and they haven’t lost a game all season; something that can’t be said about this year’s Badgers who have gotten blown out two occasions this season. You might be tempted to bet on the spread or even on the totals line for this particular contest, but there isn’t a line in the world that beats that +200 payout on Wisconsin straight up.