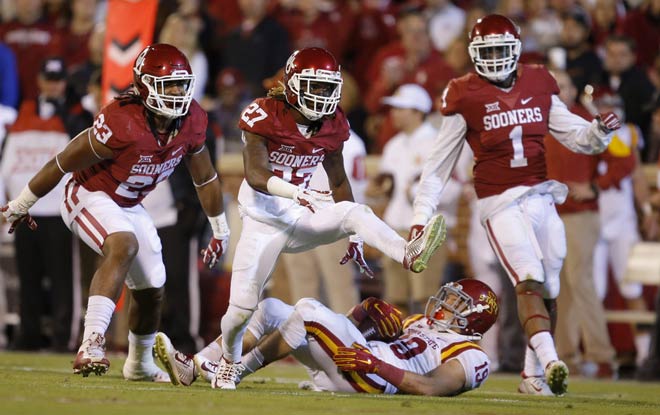 The legal online sports betting spread favors the Oklahoma Sooners over the Iowa State Cyclones by 17.5 points. Poor Iowa State just can’t catch a break. First, their season-opening game against South Dakota State was canceled. They could have used the warm-up. Especially seeing how they went on to lose the Battle for the Cy-Hawk trophy for the fourth straight time. And now they go up against No. 5 Oklahoma. The Sooners beat Florida-Atlantic 63-14 as 19-point faves in the season opener. Then they defeated UCLA 49-21, though they did not cover the 31-point spread set by the best online sportsbooks. About the only advantage the Cyclones will enjoy is home field advantage. Not even Baker Mayfield leaving for the NFL is good news for Iowa State. We’ll see why in just a sec.

Starting QB Kyle Murray is playing like a man who may not play football ever again. Which could perfectly be his case, if the baseball things pans out. The soon-to-be Oakland Athletic has passed for more than 500 yards and five TDs on just 44 attempts. And that’s just in the first two games of the season. Oklahoma’s offense has scored 112 points while the defense has allowed just 35. Unfortunately for the Sooners, they lost running back Rodney Anderson. However, Oklahoma is nothing if not deep at that position. Trey Sermon, Marcelias Sutton, Kennedy Brooks and T.J. Pledge are all waiting in the wings.

Sermon started three games in 2017 and ran for 744 yards. Including 148 yards and two touchdowns on 12 carries against Baylor. He also had another three games with at least 80 rushing yards. Sermon had 20 carries in a win over Texas last season, showing his indefatigable. Meanwhile, Sutton posted 130 yards last season and has 71 yards and two TDs on nine totes this season.

The Cyclones could only muster three points against Iowa. Then again, they only allowed 13. Then again, the legal online sports betting spread was just 3.5 points. As a result, Iowa State also failed to cover. And mind you, it’s not easy to cover against the Cyclones, especially in conference play. Iowa State has gone 16-7-1 ATS in their past 24 Big 12 games. That includes a 6-2-1 ATS record in 2017. Moreover, they upset Oklahoma 38-31 as 31-point road dogs. The Cyclones similarly upset Texas A&M 31-13 as a six-point dogs. Iowa State’s defense was key to those achievements. And it seems the secondary will have to pick up the slack for the almost non-existent offense.

It may be tempting to take Iowa State and the points. But only on the strength of their record against the legal online sports betting spread in the Big 12. The problem is, that was then and this is now. Then, Tom Manning was the offensive coordinator. Now, an empty seat is the offensive coordinator. And Kyle Murray has been doing his damndest to out-Baker Mayfield Baker Mayfield. Oklahomies over ‘Clones.