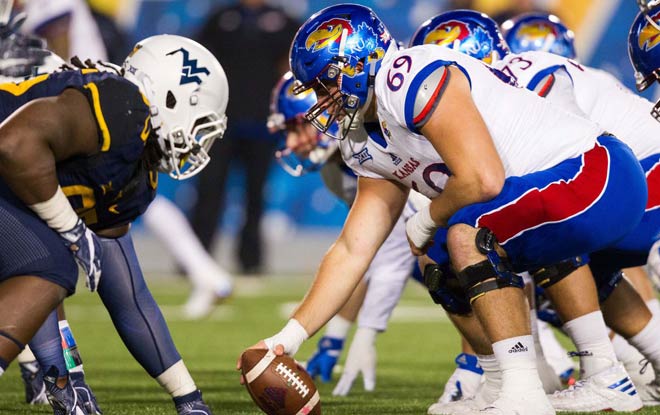 The best online betting sites favor the West Virginia Mountaineers by 27.5 points over the Kansas Jayhawks. Which stands to reason after WVU brought the Texas Tech Red Raiders crashing back down to Earth. In a battle of Heisman hopefuls, West Virginia’s Will Grier stood tall over TTU’s Alan Bowman. Grier ranks second in the country in passing yards per game. Third in yards per attempt and quarterback rating. And fourth in completion percentage. Grier has 17 TDs and three picks on 1487 yards through the air. It helps though that he has one of the best receiving units at his disposal. David Sills IV, Gary Jennings, and Marcus Simms combine for 1000+ yards and 13 TDs. The Jayhawks, however, are second in the Big 12 in passing yards allowed and first in interceptions (8).

The ground attack is the Jayhawks’ best hope to cover the best online betting sites spread. KU is fourth in the conference in rushing yards per game. This is possible thanks in no small part to running back Pooka Williams. The freshman paces the Big 12 with 118.5 rushing yards per game. Williams averages 7.9 yards per carry and has four TDs on 474 rushing yards. Additionally, Khalil Herbert, Dom Williams and Deron Thompson each have more than 100 yards. Kansas gained 400 yards and 8.3 yards per carry against Rutgers. WVU ain’t Rutgers, though.

The ‘Neers allow opposing teams just 3.97 yards per carry. TTU’s 168 yards on the ground and 4.0 yards per carry is the most WMU has allowed so far. And West Virginia still rolled past Texas Tech. And speaking about WVU not being Rutgers, here’s one important difference. Rutgers was non-conference. West Virginia is. Kansas allowed a 71.4% completion percentage and a combined 569 passing yards in losses to fellow Big 12 schools Baylor and Oklahoma State.