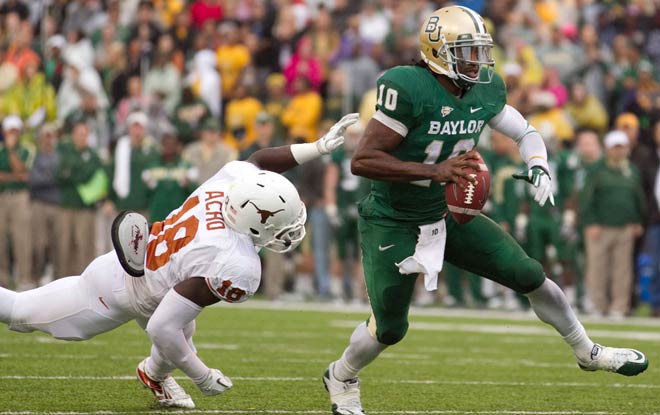 Online USA betting sites favor the Texas Longhorns over the Baylor Bears by two touchdowns with their respective extra points. The Longhorns have won five games in a row and are undefeated in conference play. A win over the Bears would make them 6-1. That would be the soonest they have been eligible for a bowl since 2009. Texas starting QB Sam Ehlinger has not thrown a pick in 163 passing attempts, a new school record. Many of those completions went to the wide receiving tandem of Lil’Jordan Humphrey and Collin Johnson. Contrary to what his name might suggest, Humphrey is actually is six-foot-four. And Johnson is even bigger. On the ground, though, the Longhorns have not had a 100-yard rusher in the last 13 games. Baylor’s own QB Charlie ‘Milwaukee’ Brewer just threw his first interception in 165 passing attempts last weekend against Kansas.

Brewer has nine TDs and two picks on 1558 passing yards. Additionally, he has completed 64.1% of his attempts. “He’s really good and has a chance to be special,” Texas coach Tom Herman said Baylor’s QB. “I can’t say enough about his development. We saw him as a true freshman. They’ve opened up the offense a little bit more, that’s undeniable.” Nonetheless, the Bears have yet to beat a school with a winning record this season. And it doesn’t quite seem like that’s about to change.

The Longhorns are still high on their Red River Showdown win over Oklahoma. Which probably has the phrase “Texas is back” trending on the Twitterz. But is Texas back to stay or just for a cup of coffee. As is usually the case, many online sports betting sites experts have brought up the “trap game” argument. You know what they say, though. Everything is bigger in Texas. Including comebacks.

Texas has played some its best football against ranked teams. The Longhorns went 3-0 SU and ATS against USC, TCU, and Oklahoma. That doesn’t bode well for No. 9 Baylor. The Bears have improved vastly compared to last season’s 1-11 record. However, Texas is better both on offense and defense. Thus customers of online sports betting sites should take the Longhorns and the points.

PS.Baylor does have the second best offense in the conference behind Texas. Still, users of the best online sportsbooks should be wary of betting on the over. The total has gone under in the last five encounters between these two schools.