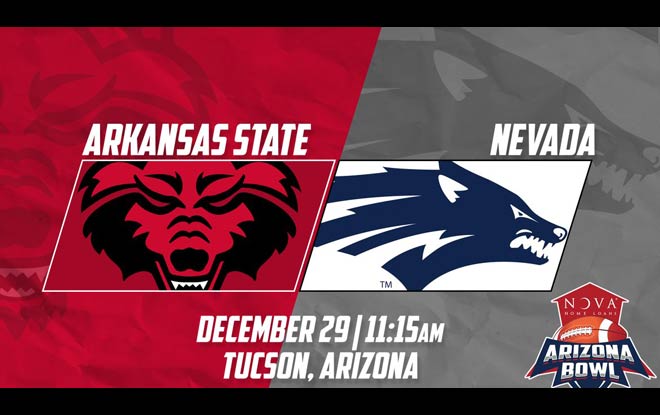 When it comes to legal online sports betting, red wolves trump a regular wolf pack. But only slightly. According to the best online sportsbooks, the Arkansas State Red Wolves are 1.5 -points favorites over the Nevada Wolf Pack. Arkansas State finished second in the West Division of the Sun Belt Conference. They posted 8-4 record (5-3 in conference play). They also went 6-6 against the point spread. Their final game of the regular season was a 33-7 win over 13.5-point road faves. This will be the Red Wolves’ eight straight bowl appearance and first in the Arizona Bowl.

Nevada finished second in the West Division of the Mountain West Conference. They had a 7-5 record (5-3 in conference play). Like the Red Wolves, the Wolf Pack also went 6-6 ATS. They’re coming off an upsetting 29-34 loss to UNLV as 14-point road favorites. This is Nevada’s first bowl appearance since 2015 as well as their second Arizona Bowl. They defeated Colorado State 28-23 precisely in the 2015 edition of the game.

“We’re excited to continue our season at the Arizona Bowl,” head coach Blake Anderson said. “This will obviously be our first appearance in this bowl game, so it will give our team a new experience at a beautiful destination and a stadium where we haven’t played before. We know Nevada will present a tough challenge, but we’re looking forward to the opportunity to win our ninth game of the season.”

Starting QB Justice Hansen has 27 TDs and six picks on 282.0 passing yards per game. He completes 67.0% of his attempts. The dually threatening QB also rushes for 181.5 yards per game. Hansen has scored six rushing TDs this season. Additionally, Marcel Murray and Warren Wand have combined for 11 TDs on the ground.

The Red Wolves lost the 2017 Camellia Bowl to Middle Tennessee, 30-35. According to legal online sports betting odds, they were 3.5-point underdogs then.

“Really, really excited to be playing football this time of year; it’s what we all work for,” head coach Jay Norvell said. “And we’re very excited to be part of the Nova Home Loans Arizona Bowl; it’s really a great honor …a great opportunity for Nevada and our football team. “It’s a real reward for our seniors; we have 17 seniors, and it’s a great way for them to go out. They’ve worked very hard and accomplished a lot in their careers.”

Starting QB has 23 TDs and 11 picks on 284.6 passing yards per game. He is connecting on 61.1% of his attempts. Mostly with McLane Mannix, who averages 4.2 catches and 72.9 receiving yards per game. If Mannix plays the Arizona Bowl, it would be his last game with the Wolf Pack. The wide receiver recently announced his departure from the Nevada football program.

Our Prediction: Arkansas State ranks 12th in pass defense, allowing just 175.9 yards through the air per game. Nevada is No. 85 with 243.1 passing yards allowed per game. The Red Wolves have the better QB as well as the better defense. As ever, you should side with the better team to cover the legal online sports betting spread.