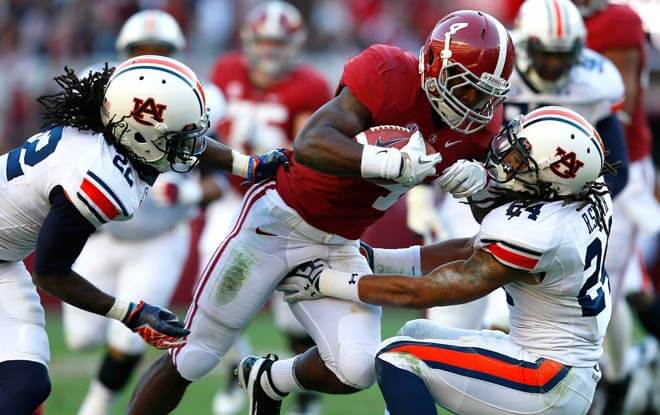 The Alabama Crimson Tide are 24-poins home favorites against the Auburn Tigers, according to sports gambling sites odds. This will be the 83rd Iron Bowl. The Tide have won seven of the last 10 meetings. But the Tigers upset the Crimson 26-15 last year. On that occasion, the best online sportsbooks had Auburn as five-point home favorites, a spread which the Tigers managed to cover. The Tigers have not won back-to-back Iron Bowls since a string of six wins from 2002 to 2007. What are the odds that Auburn will ruin another perfect season for Alabama? ‘Bama is on an 87-game winning streak against unranked teams. The last unranked school to defeat the Tide was precisely Auburn, 17-10, in 2007. This will Tigers QB Jared Stidham’s first road Iron Bowl. And Tide QB Tua Tagovailoa first Iron Bowl ever. Don’t expect first-time jitters from the Samoan Bulldozer, though.

Apparently, Tigers fans have invented the word “Gus-tration.” Is that a portmanteau of Gus and frustration, or what Auburn fans would like to do to head coach Gus Malzahn? If you know what I mean, and I think you do. Still, the Tigers have a chance to upset Alabama. In fact, they have a chance to match the legendary 1972 Iron Bowl. At least according to the fevered mind of Joseph Goodman of AL.com. If I understood correctly, Auburn has been so bad this season, they now have the freedom to be really good. And they have Malzahn’s incompetence to thank for that. It’s a brave new world, all right.

The Polynesian Polyphemus Tua Tagovailoa threw for 340 yards and three TDs against The Citadel last weekend. And then he retired to his own citadel of R’lyeh to slumber and feed while Jalen Hurts took over. The Hawaiian Behemoth has now surpassed AJ McCarron as the Tide’s most TD-pass-throwing QB. Alabama ranks No. 11 with 328.0 passing yards per game. Meanwhile, Auburn ranks 45th in yards through the air allowed per game (208.4). The Tide’s defense stumbled early on against the Citadel. However, they are still 7th in passing yards allowed per game (282.1) and 3rd in points allowed per game (13.1). Looking at some sports gambling online trends, Alabama is 25-0 SU in its last 25 home games. And 4-0 ATS in its last four conference games.

This is a similar situation to Georgia Tech vs. Georgia. Having ruined their own season, the Tigers have nothing to look forward to other than ruining Alabama’s. However, the Tide are not the Bulldogs. ‘Bama has won each of their last seven games by 24 or more points. Additionally, the Tide are 6-1 against the sports gambling online as favorites of 25 points or fewer this season. Furthermore, Auburn ranks 122nd out of 130 teams in time of possession. Finally AU’s third-down conversion percentage is just .340. The Leviathan of the South Seas will make the Tigers pay dearly if they can’t keep him off the field. Take Alabama and the points.