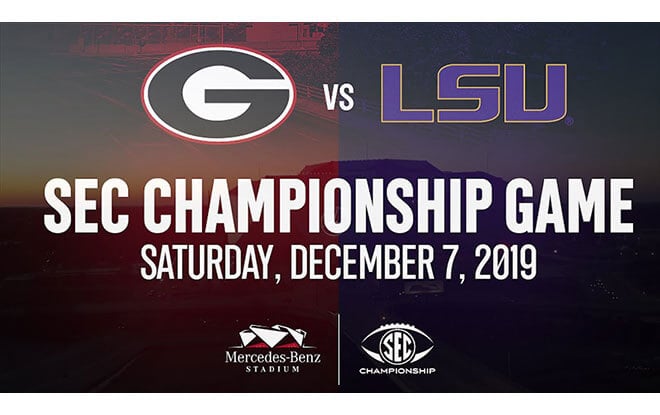 The top offshore sportsbooks favor the No. 2 LSU Tigers over the No. 4 Georgia Bulldogs by 7.5 points, as the spread goes for the SEC championship game on December 7 at 4:00 p.m. ET Mercedes-Benz Stadium in Atlanta, GA.

The Bulldogs finished the regular season 11-1 overall and 7-1 in conference play. According to the best online sportsbooks, UGA went 7-5 against the spread. Starting QB Jake ‘Ethan’ Fromm is 194 of 313 (62.0%) for 2,385 yards with 21 TDs, three picks, and nine sacks. Wide receiver George Pickens has 498 yards and six TDs on 33 receptions.

Pickens, however, will miss the first half of the SEC championship game. That could have an ill effect on Georgia’s already middling passing offense, which ranks 76th (220.6 yards per game).

Running back D’Andre Swift has rushed for 1203 yards and seven TDs on 193 carries. Swift is banged up but expected to play. The Bulldogs gain 200.0 yards on the ground per game (33rd). UGA’s total offense ranks 55th in the country with 420.6 yards per game. That yardage translates into 32.9 points per game (40th). Additionally, Georgia has the second-best scoring defense in the country, allowing just 10.4 points per game.

Linebacker Monty Rice has 79 tackles, fellow LB Azeez Ojulari has 4.5 sacks, and defensive back Richard LeCounte has two interceptions. Georgia ranks 15th in pass defense (186 ypg) and 2nd in run defense (71.0 ypg). Thanks to that second-best rushing defense, UGA’s total defense is 4th in the country.

LSU has the second-best passing attack in the country with 390.0 yards per game. Running back Clyde Edwards-Helaire has 1233 yards and 16 TDs on 182 carries. The Tigers average 170.5 yards on the ground per game (57th). LSU’s total offense (560.5 yards per game) is second only to that of Oklahoma. Also second-ranking is the Tigers’ scoring offense with 48.7 points per game.

This is the proverbial irresistible force versus the unmovable object. The Tigers have the second-best scoring offense in the country. LSU scored 164 combined points in their last three games.

And Georgia has allowed a total of just 34 points in their own last three games. However, the Tigers defense has been progressively improving in that same period. That improvement will be key to LSU covering.