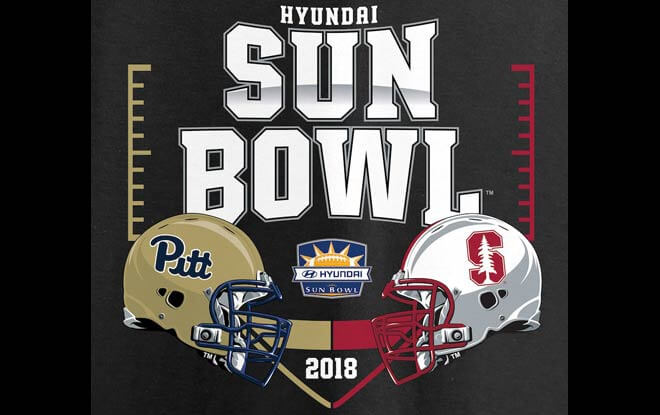 Legal betting sites favor the Stanford Cardinal by 5.5 points over the Pittsburgh Panthers in the 85th Sun Bowl. Stanford finished third in the Pac 12 North division with an 8-4 record (6-3 in conference play.) The Cardinal also went 7-4-1 ATS during the regular season, according to the best online sportsbooks. They are coming off a 23-13 win over California as three-point road favorites. This will be Stanford’s 10th straight bowl appearance and fifth Sun Bowl.

Pittsburgh was the ACC Coastal division champion and championship game participant. They finished with a 7-6 record (6-2 in conference play) as well as an 8-5 ATS record. The Panthers lost the ACC championship game 42-10 to Clemson as 28-point underdogs. Pitt will return to a bowl game after losing the Pinstripe Bowl 24-31 to Northwestern in 2016.

Per legal betting sites, the Cardinal is 4-3 SU and 5-2 ATS in bowl games. Moreover, Stanford is 2-1 SU and ATS in December bowls. Finally, they are 9-1 ATS when playing a team that averages at least 5.9 ypc in the last two years.

The Cardinal ranks No. 40 against the run, allowing 140.9 rushing yards per game. The ground attack is, as we know, Pitt’s preferred mode of offense. Stanford allows 23.8 points per game (41st) but held foes to 17 or fewer in two of their last three games.

In the regular season finale, starting QB KJ Costello had one TD on 237 yards. JJ Arcega-Whiteside had 109 yards on five receptions. And Bryce Love had 74 rushing yards.

The Panthers allowed more than 30 points in six games. A lot of that had to do with Pitt’s run defense, or lack thereof. Pittsburgh allows 4.9 yards per carry and 184 yards on the ground per game (86th). The Panthers allowed 22 rushing TDs as well. Four of those came against Clemson in the ACC championship game, where they allowed the Tigers 301 rushing yards. The Cardinal’s Bryce Love is due for a big day, and that could be the day of the Sun Bowl.

Pitt is a good at the run as they are bad at defending it. They gain 229.5 rushing yards per game (18th). Both Qadree Ollison and Darrin Hall accrued at least 1000 yards on the ground this season. On the other hand, the Panthers average just 142.2 passing yards per game. As a matter of fact, QB Kenny Picket only managed a risible eight yards against Clemson. I guess you can’t say “Pickett” without “pick.”

Our Game Prediction: Stanford only lost to teams that were or finished the season ranked. Pitt lost to both ranked and unranked teams when all was said and done. So the washed and unwashed masses that flock to legal betting sites should take the Cardinal and the points.