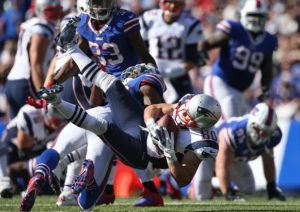 The New England Patriots have a new challenge on Monday Night Football against Buffalo Bills at Gillette Stadium, Foxborough, Massachusetts.

Buffalo Bills will try to spoil the perfect betting season that the Patriots are having so far, a 10-0 it’s not easy for any of the teams in the NFL.

Patriots are the big favorites on this game; the betting line is Patriots as -7-point favorites versus the Bills, and the game’s total set at 48.

The Patriots are coming from a great match against the Giants, were they won 27-26 in an amazing last second score.

They don’t cover the betting spread as -7 in that occasion, this could change this time against the Bills, they are 26-3 against Buffalo since 2001.

The stats are in favor of the Patriots as well, an excellent passing yards of 277, rushing yards of 103, average points per game of 29 and averaging 3 touchdowns per game is something amazing.

Buffalo Bills (5-4) with a no perfect season so far will try to take down the undefeated New England this Monday Night, something difficult for them, in their last 14 meetings, the Patriots has won 13 of those 14 games.

The passing yards is average 220 yards and this won’t be a factor versus the Patriots, they have a good rushing offense with an average of 103 yards, 19 points per game and the touchdowns per game is 2.

In their last game Buffalo beat the Jets 22-17 and covered the +2.5point as underdogs for the game.

Betting Line: The Big favorites Patriots are -7-point favorites versus the Bills, and the game’s total set at 48.